FORT WORTH, TX, December 11, 2019 – The City of Fort Worth recently partnered with healthcare cost-reduction experts, SmartLight Analytics, in an innovative effort to alleviate the rising costs of employee healthcare. An initial analysis of employee healthcare claims from the previous two years showed that the ongoing partnership could save millions for the City over the next few years.

Given the estimate that 1 in 3 healthcare dollars in the US are spent on fraud, waste, or abuse, the City of Fort Worth was eager to find an independent partner with the required expertise to reduce unnecessary costs for employees, retirees, and taxpayers. The City of Fort Worth Human Resources department engaged SmartLight Analytics to review a subset of past paid claims in a pilot program. Initial findings showed that an ongoing partnership would give the City additional tools to continue to proactively fight against wasteful healthcare spending and decrease its overall healthcare costs.

SmartLight CEO, Asha George, said its “singular objective is to meaningfully reduce the City of Fort Worth’s per member per month (PMPM) cost by identifying and removing wasteful spending from its annual health plan dollars.”

“The intended outcome of this examination was to report significant findings to Fort Worth on its health plan spend and also provide solutions for reducing potential wasteful spend in future payments,” SmartLight stated in its first report to the City.

Some examples of what SmartLight Analytics was able to identify include:

Given the success of the initial engagement, SmartLight Analytics will now enter into an on-going partnership with the City. Once a wasteful claim is identified, SmartLight will pass that information on to the City’s current medical and prescription providers and work with them to get the money back for the City. Additionally, the medical or prescription providers may report these findings to authorities to help curb the abuse throughout the healthcare system. SmartLight Analytics anticipates the City could save up to $2-$3 million per year in reduced wasteful claim costs.

“We anticipate that SmartLight Analytics will identify claims with fraud, waste, or abuse.  Then, they will work with our claims administrator to recover the costs for the City, and have them credited back to us,” said Brian

Dickerson, Fort Worth’s Human Resources Director. “This will be a win for our employees, our retirees, and the taxpayers of the City of Fort Worth.”

SmartLight Analytics provides a comprehensive solution to effectively reduce health care spend through proven methods developed over decades of focused experience. The City of Fort Worth engaged the firm to further reduce spending and save taxpayer dollars. The SmartLight Analytics clinical team led by board-certified physicians reviewed the claims that were identified as either being unnecessary, duplicates, or billing errors that are costing the City unnecessary dollars. The initial report was generated using statistical models and showed the City of Fort Worth exactly where there were issues. On a go forward basis, through their data analytics and clinical expertise, SmartLight will work with the City’s insurance carrier to eliminate future wasteful claims.

The partnership will provide the City with significant savings. 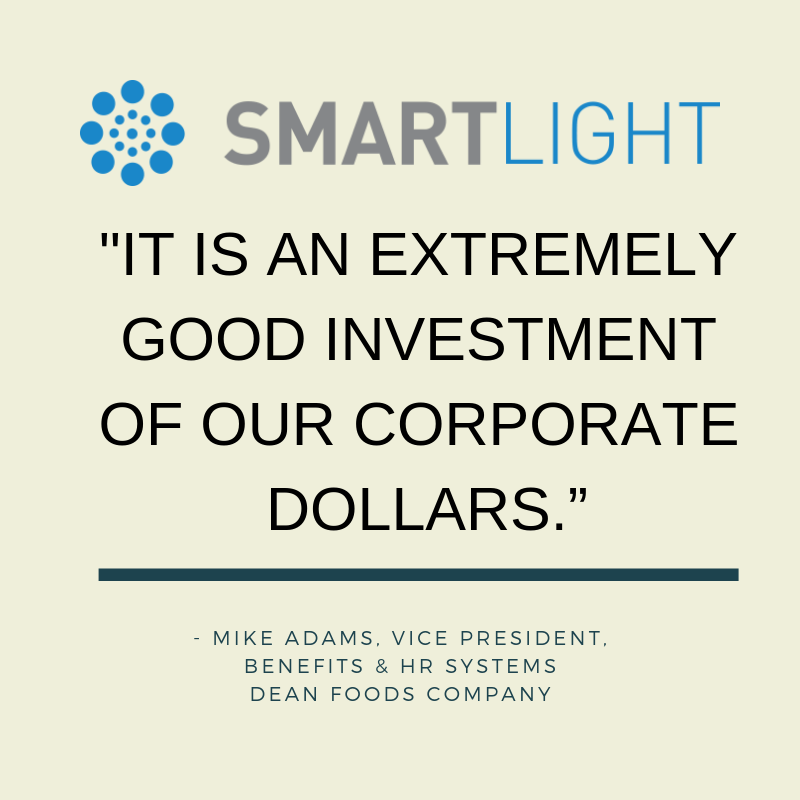 DALLAS, TX – As executives across the country are looking for ways to reverse the trend of ever-increasing employee healthcare costs and the government is pushing for more transparency in billing, a Dallas-based analytics firm is providing a new way to accomplish both.

Asha George, CEO and co-founder of SmartLight Analytics, said her aim is to make a meaningful impact on the rising cost of healthcare for employers and employees. She has spent years working to build a team of data analytic specialists and clinical board-certified physicians to conduct systematic reviews that result in significant cost savings. Big employers – especially those with 10,000 or more employees – don’t have the time or expertise to monitor claims, she said. And, claims processors are consumed by just processing and paying the claims, which means there is usually no review happening.

Two such employers – Dean Foods and the City of Fort Worth – are diving deep into their employee medical claims to find savings from waste, duplication, errors and even fraud. Both employers are working with SmartLight Analytics to mine their healthcare claims data for things like unnecessary testing, billing two doctors for the same service and careless errors. Fraud can also be a significant find. In Fort Worth, an initial assessment of the city’s employee healthcare claims data aims to further reduce healthcare spending costs, which in 2017 went $15.2 million overbudget. Dean Foods began reviewing its claims in 2016 and is reaping the benefits now.

“It’s an extremely good investment of our corporate dollars,” Adams said. “SmartLight established a good working relationship with our medical claims processor. We are extremely happy with the results. They identified claims with waste and fraud, researched and recovered those costs and had it credited back to us.”

“The City of Fort Worth is looking at ways to further reduce their employee healthcare spend because they have a finite budget and, when it comes to managing the rising cost of healthcare,  they have to continue to look for ways to contain those costs,” George said. “The city has reduced spending in the last year and gotten costs under control with some innovative initiatives such as on-site clinics. We will work to help them realize further savings on healthcare costs by identifying wasteful spending and errors currently occurring in their employee healthcare claims.”

The city’s budget saw a dramatic turn-around in 2018 when the cost for providing healthcare for more than 6,000 employees plus dependents came in under budget. As the city, like many other municipalities and businesses, continue to face the uphill battle of rising healthcare costs, officials engaged with SmartLight Analytics to look at additional innovative means to keep costs under control moving forward.

George said SmartLight’s role will be to analyze two to three years of healthcare claims from the city to find waste — such as duplication of services, unintentional billing errors, and intentional fraud, waste or abuse — and take action to eliminate this unnecessary spend from the city’s employee healthcare costs.

“We’re in the process of getting historical data to run through our inferential analytical models now,” George explained.

The SmartLight Analytics clinical team of medical coding specialists, led by board-certified physicians, reviews claims identified by analytic models as either having waste, duplications, errors or other issues that could be costing the city unnecessary dollars. They then report those findings to executives to show exactly where there was wasteful spending or other errors or claims issues. SmartLight’s clinical team takes it to the next level by working with insurance carriers to eliminate the wasteful claims before they are paid again on similar claims in the future.

George said she expects SmartLight to identify as much as a 5% savings on the healthcare spend through its analytical analysis for each client. The initial process takes rough 8-10 weeks to complete once SmartLight receives the data, both medical and pharmacy claims. Fort Worth should see its first report sometime in late September.

“In the end, if we’ve done our job, as we have for other customers,” George said, “we can reduce the city’s spending, and eventually, the out of pocket expenses for employees without reducing benefits.”

“I headed up the Payment Integrity departments inside various large insurance carriers for decades before starting SmartLight Analytics. SmartLight was created because we saw the need for more independent, pro-active intervention in reducing unnecessary healthcare spend,” George said. “Our goal is to deliver our insider expertise to self-funded employers to lower healthcare costs for everyone – employer and employee.”

“I’m passionate about making a meaningful impact in this space,” she said. “Insurance carriers, in the role of third-party administrators, do their best to manage the waste in the system while processing claims, but we have, without exception, reduced spend by an additional 3-5% for our customers.”