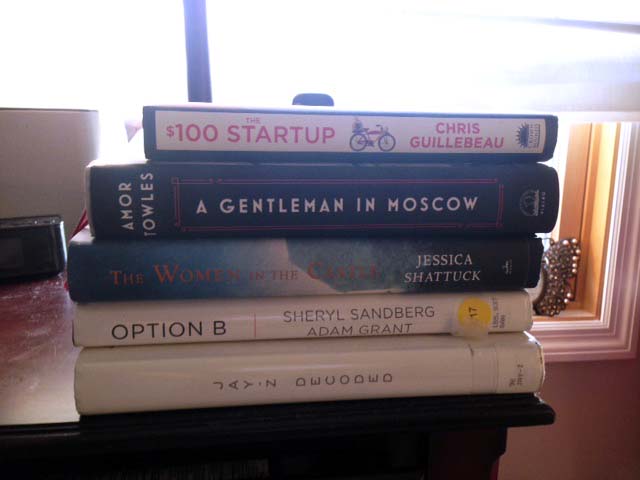 I’ve read two non-fiction books recently and I seem to be recommending them to everyone. The first I would have never picked up on my own, but it was the monthly read for my book club: Being Mortal by Atul Gawande. The second book I had been waiting to read since I first saw Sheryl Sandberg in an interview talking about it: Option B by Sandberg and Adam Grant.

Being Mortal’s subtitle, Medicine and What Matters in the End, gives a hint at the subject matter but not the depth and care that Gawande gives the material. Gawande’s writing mixes medical science, journalistic storytelling and personal sharing. I never felt overwhelmed with the medical subject matter; rather, I found the book engaging and meaningful.

Gawande, a doctor by training, explores how we handle end-of-life issues in our society. He does address situations in which individuals are dying young, but the meat of the book is about the elderly. This inevitably leads him into the world of assisted living and nursing homes.

When I was young – I can’t even remember how old – my great-grandmother was placed in a nursing home. I remember going to see her just one time. I was with my mother and grandmother. I don’t remember much more of the visit other than the place smelling badly. What I do remember well is having nightmares. The nightmares I remember more than the visit itself. In my dream, I could hear people calling out to me down the halls of the nursing home and I remember there was a chain-linked fence. It put a very vivid image in my mind.

When I started reading Being Mortal that was pretty much the sum of my experience with nursing homes – no one else in my family has lived in one. Being Mortal delves into the world of nursing homes, why they were originally established, and even gives an interesting history of the conception of the assisted living idea. Gawande’s observation that safety is often the overriding concern for a family and a doctor who place a senior in a nursing home makes you wonder if nothing else matters. “So they won’t hurt themselves” becomes the reason for all manner of decisions, regardless of other factors.

Being Mortal asks the question: what creates the best quality of life for someone at the end of their lives – the safest environment or the environment in which they feel comfortable and familiar?

One story that stuck with me was the profile Gawande wrote about a home in New Berlin, New York.  A young ER doctor, having just taken the position as medical director of a home, arrived to find a sad place. The staff was somber and the patients were sedentary, bored and without socialization. The doctor started challenging the status quo. He purchased birds, cats and dogs. He made sure each resident had an animal or plant to take care of during the day. Staff built a garden in the yard. Residents were responsible for tending to the garden. Children also started visiting. The facility was transformed.

Being Mortal is much more than I’m able to write about here, and I fear I’m making it sound drier and more serious than it is. It is a wonderful read for all stages of life.

Shortly after finishing Being Mortal, I read Option B. I read Sheryl Sandberg’s first book, Lean In, and had been following the story of her husband Dave’s death at the age of 47. In a television interview, Sandberg told the story of the book’s title. After her husband died a friend was helping her figure out how to handle parent night at her children’s school. She said to her friend that she wanted Dave back to attend with her. He told her, “Option A is not available. So let’s just kick the shit out of Option B.”

That’s all I needed to hear. I wanted to read the book. Everyone in some shape or form is living the Option B in their lives. I know I am in a very real way right now. What I found so rich about this book is not just the raw emotion Sandberg shares about her story but about how it applies to all of us. She is not just addressing widows whose husbands have left them way too early, she is addressing us all.

In talking about her return to work after her husband’s death, she talks about the awkwardness we all face about what to say in such a situation. We’ve all been there in one way or another. But Sandberg offers a suggestion: Instead of not bringing up what she calls “the elephant in the room,” it is much easier to acknowledge the situation. I asked my daughter just last week if she had checked in with someone who was going through a traumatic experience. She told me she didn’t want to bother her. This, Sandberg writes, is what people often think – except for the person going through the trauma. But often that person does, in fact, appreciate friends who check in, who ask how they are doing “today” and who show concern rather than just avoid the subject or even the contact at all.

Sandberg’s husband died four months before a friend of mine. He was 45 years old, a wildly popular pediatrician and the father of six children. He was diagnosed with Cholangiocarcinoma. As I read Option B, I thought of his wife on every page. Taking Sandberg’s advice I messaged her. I wanted to make sure she had heard about the book.

She messaged me back. She’d read it three times already.

Least I make you think this entire book is a big downer, it is not. Sandberg and Grant talk about building resiliency and, I think, most importantly about finding joy after adversity. The book does not read like a how-to or a psychology journal, it offers stories and suggestions. It flows quickly and I breezed through it at a time when I didn’t have a lot of time to read.

There is now a whole organization built up around the idea of an Option B: https://optionb.org. I like the idea that we’re all living some form of an Option B. It reminds me of a quote I used to have in my office, “Everyone you meet is fighting a battle you know nothing about. Be kind. Always.”

Now let’s kick the shit out of all of our Option Bs!