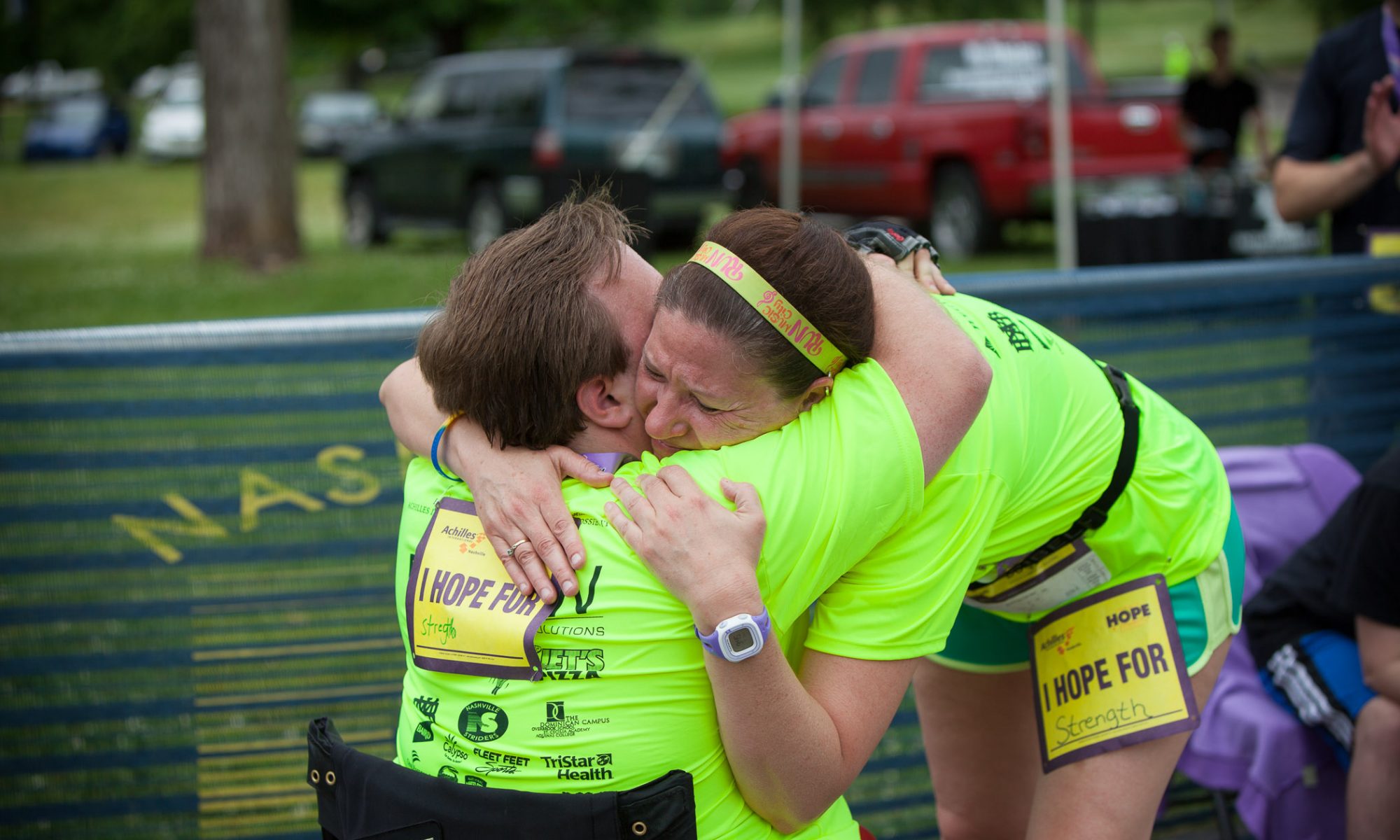 EDITOR’S NOTE: This blog was originally published Wednesday, May 14, 2014 on the Overbrook School Blog. It was written when I was serving as director of communications for Overbrook School and campus host facilitator for the first Achilles Hope & Possibility race in Nashville.  The race continues this weekend, Oct. 21, 2017, on The Dominican Campus. Join me there again this year.

St. Francis of Assisi said, “Preach the Gospel at all times. If necessary, use words.” For those involved with Achilles International Nashville Hope and Possibility race, words were not necessary. The gospel was living, breathing and, in hundreds of cases, running a five miler.

Melanie Yappen was one of the original founders of the Achilles International Nashville chapter, an organization that pairs able-bodied athletes with disabled athletes for weekly runs and road races, and the first race thre years ago. Mrs. Yappen said nearly 700 runners ran the first race with 10% being disabled. The disabled runners ranged from blind runners to amputees. Some completed the race in wheel chairs and on hand-pedal bikes while still others were pushed.

“It was truly an inspirational celebration of running by athletes of all abilities,” said Mrs. Yappen, that first year as she stood at the finish line cheering on all athletes and giving out as many hugs and high-fives as she did medals. “We hope on a broader scope that our community-unifying event will paint a brighter horizon for healthier lifestyles for people with disabilities and an increased acceptance of people with disabilities.”

The race begins on The Dominican Campus on West End Avenue as runners journey through the neighborhoods surrounding campus, a journey that for many was a first: the first time they were able to participate in a race and the first time they accomplished such a feat. For Anthony Spellman, brother to Overbrook students Michael and Jack, it was his first race on foot in 2014.

“Well, he finished the race on foot and was exhausted,” his mother Lisa said following that first race. “He took a three-hour nap afterward!”

Achilles International founder Dick Traum, the “Central Park jogger” Tricia Meili, and the 2012 Sports Illustrated Sports Kids of the Year 2012, Connor and Cayden Long participated in the event the first year as well.

Witnessing these athletes and many others race each year is a rare opportunity to see the gospel in living action. Jesus showed us in His life through His actions the importance and dignity of every person, no matter how different. He stopped to heal the blind beggar and his touch allowed a crippled man to walk. He noticed each person’s needs when others did not. Although we did not get to see Jesus perform those miracles, for hundreds of people who have gathered for each of the Achilles races, they witnessed people taking others by the hand and leading them to a tiny miracle. You could feel the hope and possibility rushing over the road as each competitor crossed the finish line.

Join the race again this year on Saturday, Oct. 21, 2017. Even if you don’t run, just come and cheer on the athletes.