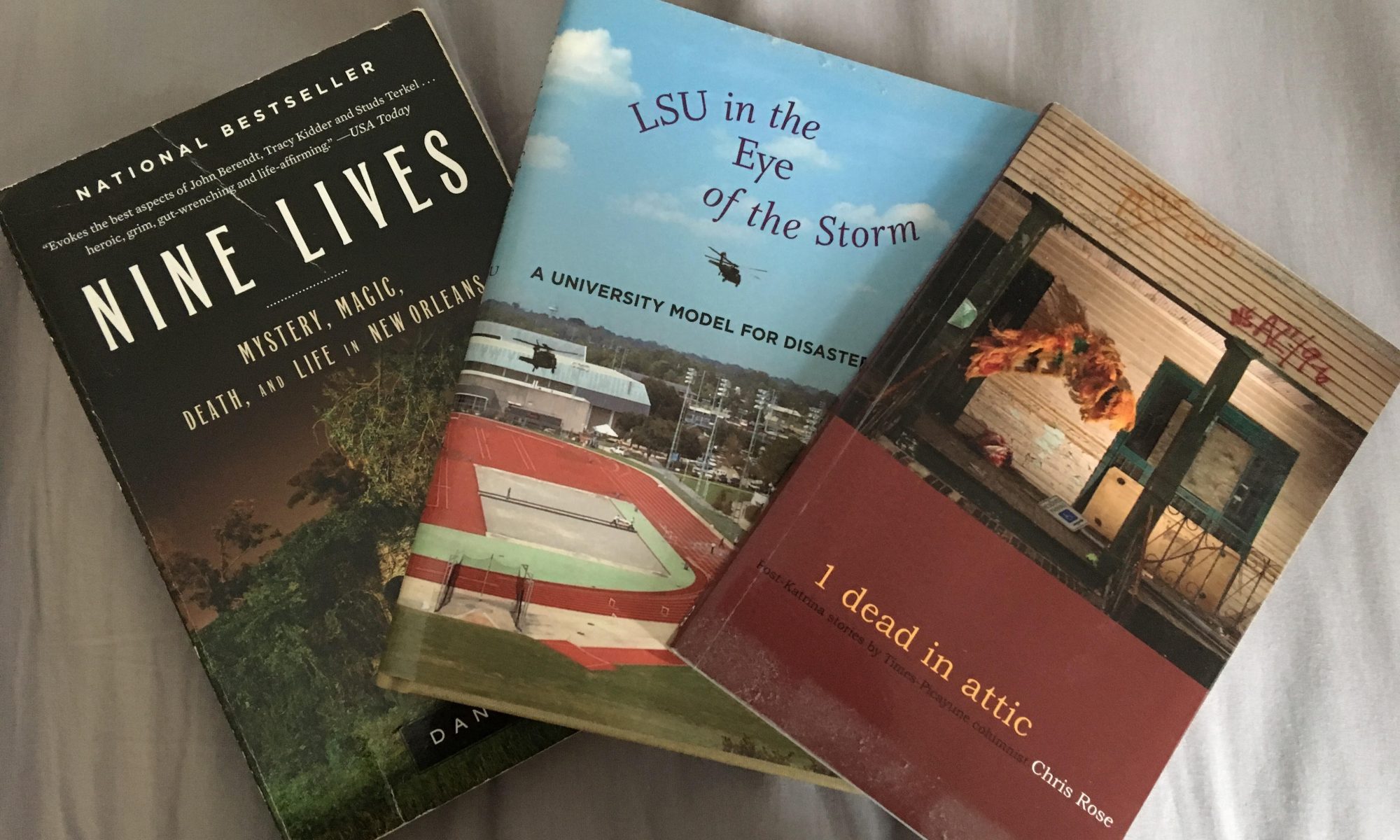 “Mom, you need to get up and turn the TV on now!” I kind of yelled at her.

She begrudgingly agreed and said she would call me back in a little while to let me know if they were going to leave. I couldn’t stop staring at the TV. I had never seen anything like this before.

Impatient, I called my mom back as soon as I saw Mayor Ray Nagin on CNN telling everyone to get out. My parents decided to leave their suburban house late that Sunday morning and drive to Nashville to stay with us. In their panic of last minute nerves, they piled the car with a Costco pack of toothpaste and deodorant and a small TV. They forgot their lockbox, their basket where they kept their monthly bills, and their family pictures. They only brought a change or two of clothes.

It took them more than 13 hours to make a 7-hour trip due to the evacuation congestion. During several calls from the road, I began to have panic attacks as I imagined my parents in their car on the road in southern Mississippi as the storm came ashore. But, thankfully, they reached Middle Tennessee sometime in the middle of the night.

My sister had evacuated to Dallas and my uncle to Florida. My brother, however, stayed with his then-fiancée at Tulane Medical Center in downtown New Orleans where she was working at the time.

My parents ended up staying with us for three weeks. My mom sat in my living room and cried as she watched events unfold on TV. We lost contact with my brother as his cell phone died. He got stuck with the staff at Tulane for several days and was finally helicoptered out when the hospital hired a chopper to get the staff left behind after the National Guard became overwhelmed with rescues and the violence happening in the aftermath.

They didn’t use the title “Hurricane” before the names Camille and Betsy when I was growing up. And now they don’t use it with Katrina anymore either – everyone knows who you’re talking about. The storm has become a societal frame of reference that everyone understands. “That was before Katrina,” you hear New Orleans residents say all the time.

Harvey, and I fear, Irma, will probably end up being the same for Houston and south Florida residents. Storms that changed everything. When I go back to New Orleans I get lost sometimes because even though I grew up there, so much of the city looks different to me now. I didn’t have to live through the rebuilding, but my family did. It was a long road. It was a trauma from which they are still recovering. My brother told me this week he has 500 bottles of water in his house and food to last him three weeks without refrigeration. That’s not your usual pantry fare.

When I look at the radar today and see Irma, she looks like Katrina. She’s a monster. And families just like mine are in her path. Someone is calling her mom right now begging her to evacuate and having a panic attack waiting because there is nothing she can do. People are scrambling to throw the wrong things in their cars as they pack because they are too nervous and scared to think straight. But I hope they find a safe place to harbor during the storm.

When my parents arrived in the middle of the night at our house, they parked and came in to crash, exhausted. In the morning, my neighbors came over one-by-one with cookies, goodies and greetings.

“We saw the truck in your driveway with the Louisiana license plate and remembered your family was from New Orleans,” my neighbor said when I opened the door. “We just wanted to make sure they are ok and see if they need anything?”

The teller at the bank in Franklin helped my dad access his bank back home so he could pay the bills coming due in the weeks before they could return to Louisiana. A woman at the chain of the same gym my mom belonged to let my mother visit the Franklin location while she was here. The second time my mom walked in to work out, the woman had a bag of clothes waiting for her because my mom mentioned how she didn’t think to bring three weeks’ worth of clothes. The people in my office put together a basket of goodies for me to take home to my parents.

It was the best part of the whole mess. That will happen again. It already is happening. CBS ran a wonderful piece on the news the other night about how Harvey really snapped us out of our national nightmare of unfriendly discourse. It’s the silver lining in all these dark grey clouds around.

Pray for those in the storm’s path and those recovering from the aftermath. And not just this week or this month, but for as long as you can think to do so. All these storms change more than just the landscape.

Three books I read in the years following Katrina are ones to look up if you’re feeling the need to read more: